I am sitting on the Punta Union Pass at 4,600m watching hikers pick their way towards the top. They are moving slowly, ever so slowly. Welcome to the world of high altitude trekking in Peru. After 10 days on a circuit of the Cordillera Blanca in which we have met no other trekkers we have diverted onto the popular Santa Cruz trail and hikers are everywhere. It is like putting a huge mirror on myself to see what I have undoubtedly looked like as I crested numerous passes up to the 4,800m mark. Pick one foot up, place it carefully up the slope. Repeat. Don’t go too fast or you will be left gasping for breath in the thin air.

As we have wound our way through the highest equatorial mountains in the world the peaks have regularly been shrouded in cloud. This only makes the views more tantalising when the clouds part and truly spectacular citadels of rock and ice appear, at times as though floating among the clouds.

I am on a World Expeditions Alpamayo Circuit 16 day trip. Everything runs like clockwork due to our hardworking guide and team including a cook and donkey drivers. How well is vividly illustrated later that day when we happen upon a sole female hiker in a most distressed state. She had signed up with one of the many cheap tour operators in Hauraz. Displaying symptoms of altitude sickness she was simply abandoned by her tour guide and told to walk back by herself the 4/5 hours to the valley where she “should” be able to catch a local bus back to town. Our guide loads her bag onto one of our pack animals and we walk her down to the park entrance two hours away where we hand her over to the park ranger for evacuation. We are heading back into the hills. 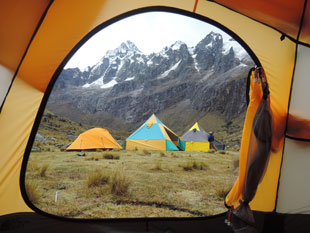 Over our trip we climb numerous passes, pass many lakes of different colours, and are treated to absolutely stunning mountain landscapes. Our guide tells us the circuit is harder than the more popular Huayhuash circuit with more difficult and technical terrain and bigger elevation gains. We soak up the atmosphere of some steep and challenging passes; fantastic hiking. And apart from our brief foray on the Santa Cruz we have the place pretty much to ourselves.

But the altitude is a constant companion. We are sleeping most nights over 4,000m and any exertion creates a bout of puffing. I learn to drink from my bladder when stopped, not moving as I am used to, and just putting on boots while bent double leaves you sucking in air. At these altitudes there is less than 60% of the air that is at sea level. I gain a new respect for climbers that scale not only the 6,000m peaks that surround us but the great peaks of the world everywhere. 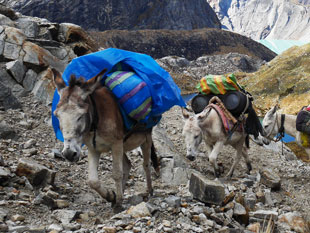 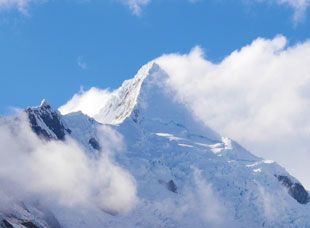 At times our journey takes us through the villages of the local Quechan people. While we may be slow motion hiking these simple rural folk also live life to a notably slower beat than the frenetic city world from where I come. Simple they may be but they have developed extensive irrigation systems with well organised fields growing cash crops such as potatoes, corn and peas and appear to have well provided lifestyles. Most notable is a dearth of the male sex, it is almost universally the case that it is women in brightly coloured clothes that are working in the fields and tending to many domestic animals. 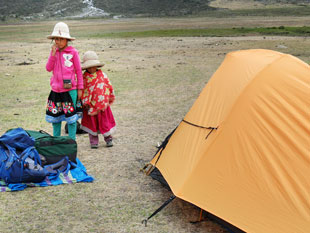 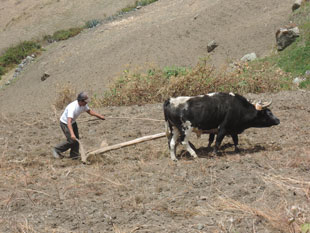 But the stars of the show are undoubtedly the massive peaks of the range. Alpamayo itself proves to be elusive for much of the three days when it is supposedly in view but does come out of the cloud as we climb up Gara Gara pass. We are treated to stunning lunchtime views of the Pucajirca Massif from top of Mesapata Pass on a perfect windless day. The descent from this pass is idyllic as we drink in the big mountain atmosphere. Perhaps the most impressive of all is the rugged summit of Taulliraju. We pass around three faces of this peak over several days which shyly keeps its secrets hidden most of the time but teases us with enough glimpses to admire its glory. First climbed by renowned French climber Lionel Terray in 1955 this peak has had few subsequent ascents and is a serious undertaking for even seasoned mountaineers. 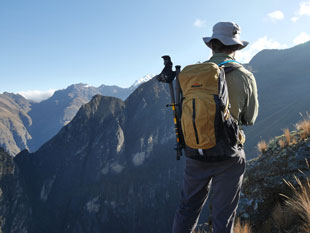 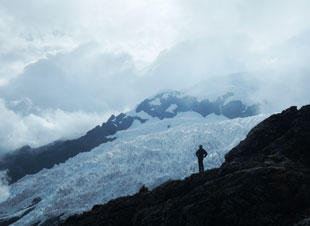 We spend our last night at the aptly named Avalanche Camp, a small shelf perched high on the mountain side directly opposite the massive icefall of Nevada Contrahierbas. On a regular basis pieces break away and fall 500m or more down to the valley below. We witness one such massive avalanche before the cloud sweeps in and shrouded in mist the rain sets in. While denied the view a surreal atmosphere is created as we hear the rumblings and roar of avalanches while the rain beats on the tent roof. In the early hours of the morning I scamper from the tent on my nightly business to be greeted by a clear sky and full moon lighting the entire mountain before me. Far away down the valley the lights from a small village twinkle. It is a magical scene and despite the cold I stop and savour the view for a few minutes before heading back to the warmth of my sleeping bag. Such are the delights of trekking in the Cordillera Blanca. 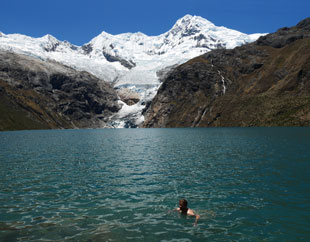 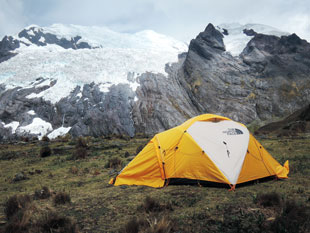