I like to race. A lot. With racing coming back now after such a lull in 2020 (I won’t mention the “C” word), it’s hard not to want to sign up for anything and everything. Those who know me know that my race schedule for the first half of 2021 has been a little ambitious, and probably goes against the (good) advice of most coaches. But it’s fun, so for now at least, I’ll keep at it.

One of the big problems with racing so frequently, aside from the obvious risks of injury or burn out, is that it leaves very little time for recovery, training and tapering between each race. Because of this, I’ve tried to get moving as quickly as I can after each race. I need a shoe that helps with these sort of “ease back into it” runs. Enter the Karacal, the latest in La Sportiva’s mountain running line-up. 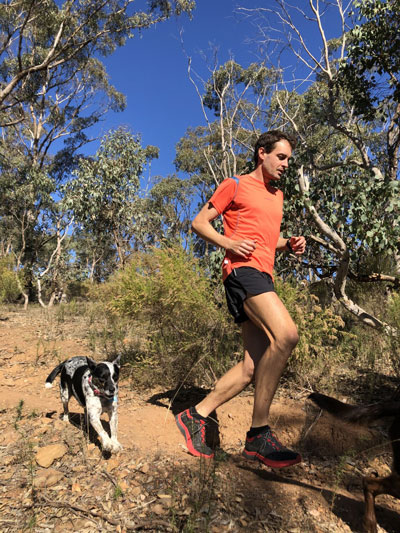 The emphasis with the design of the Karacal was comfort and maximum mobility. The result of this is a shoe that is ideal for spending long hours out on the trail, and also perfect for those ‘recovery runs’ (if such a thing actually exists – I’ll let you be the judge on that).

The upper is made from a single layer 3D mesh and breathes really well. The seamless material reduces the chance of blisters and hotspots. There is plenty of room in the toe box – more so than many La Sportiva models, but on par with its cousin the Jackal.

The first time I wore Karacals, they felt super comfortable straight out of the box, but then after running a few Ks I felt that there was perhaps too much room though the midfoot. This was easily fixed though, with an adjustment of the laces. The shoe is designed to fit a range of foot shapes. So if your feet are on the wider side, the Karacal can accommodate them. If your feet are narrower, just make sure you lock down the midfoot to keep it in place. Once I had this sorted, the Karacals were comfortably snug. The heel cup feels much more cushioned than the Jackal, and microfibre reinforcements prevent heel movement – again, adding to the control and stability of the shoe.

Let’s get into some stats – the Karacal has a stack height of 26mm in the heel, and 19mm in the forefoot, giving it a 7mm drop. Very similar to the Jackal. The outsole is made from La Sportiva Frixion Red™, which is a soft, long-lasting compound that has excellent grip but is also the most hardwearing of La Sportiva's range. The 3.5mm lugs are certainly not the most aggressive when it comes to trail shoes, and I’m not sure how well they would hold in very muddy conditions, but for dry or rocky single track they are great. The tread pattern also includes the Impact Brake System™ to try and maximise ground contact, plus you don’t feel like you’re running in footy boots when on the hard stuff. 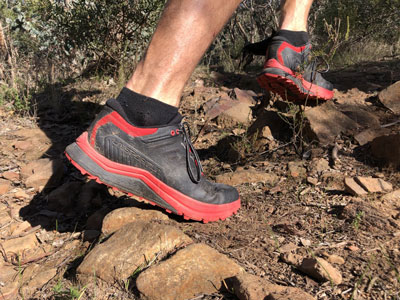 The midsole is similar again to the Jackal in that it features dual density EVA foam, with the softer, spongier stuff under the forefoot for cushioning, and essentially a ring of harder density foam around the heel to provide stability. It also has the same compressed EVA rock plate found in the Jackal, to stop any sharp rocks poking through, and to minimise torsional movement. Where it differs from the Jackal however is that it does not include the Infinitoo™ pods that help with energy return. I’m not sure why this is, perhaps they thought it wasn’t necessary for a “training shoe” and were more interested in reducing weight. Because at 290g (EU42), they are actually lighter that the Jackal. So, in this case the Mercedes is lighter than the Ferrari.

It’s not all slow recovery runs with the Karacal though. In fact they were the shoe of choice for national 48-hour champion Ewan Horsburgh at this year’s Ultra Trail Australia. Last week I wore them for a short tempo run and felt that I was able to move along very nicely. The flexible forefoot allows for that faster pace spring off, also great when moving uphill. I wouldn’t classify them as a speedwork shoe, but it’s nice to have that comfort and cushioning in a shoe that you can also boot along in if you want.

All in all, I really rate this shoe. There are a lot of clever little features that have gone into making it very comfortable and durable. I think I will probably stick to the Jackal as my go-to shoe for ultra-distance racing, but I’m pretty sure I’ll be spending more hours out on the trails in these. If you are looking for an ‘all-rounder’ trail shoe that is light, comfortable and you can put a lot of Ks into, then I recommend checking them out.