This is the fifth post in a series by Bogong owner Neil about the Why, Where and How of hiking in Europe. See also:

I came to go hiking in the mountains of Norway almost by accident, little did I know the wonderful walking experiences that I was to find. Rugged mountains, beautiful lakes, long long days and a very big sky are my enduring memory of Norway. Few Australians I know have hiked there. I hope this blog whets the appetite of a few more because the quality of the hiking experience is second to none. I completed multi day walks in three mountain areas, the Rondane, Jotunheimen and Trollheimen. All have a different character, offer a uniquely Norwegian experience and from talking to Norwegians offer the best hiking Norway has to offer..

So why go walking in Norway?

Hiking in Norway is made very accessible due to the infrastructure that surrounds its mountains. Norwegians are very outdoor orientated people. There is an excellent English language guidebook Walking in Norway by Cicerone. It tells you all you need to know. Norway has a strong alpine club called the Norwegian Trekking Association or DNT which has a comprehensive website including an English version. On it you will find a map with a simply astonishing network of mountain cabins.

Mountain Huts or Cabins in Norway

Norwegian Mountain Huts are very well appointed. They are typically situated in valleys, usually with a private road up to them for servicing. Breakfast is a well stocked buffet from which you may make a lunch pack. Dinner is a sumptuous affair of 3 courses with seconds routinely offered. You need to be walking hard to burn enough energy to match the meals!  These are what Norwegians call full service huts. A sleeping sheet needs to be carried. Huts offer all the services described in my blog Mountain Huts of Europe but are deluxe by comparison to their continental European cousins.

There are also no-service cabins which are shelter refuges like huts in Australia. BYO everything.

There is another category called self-service cabins. These are fully stocked with tinned foodstuffs and bedding and hikers pay on an honesty as-used system with a credit card. Simply amazing. There are no staff to wait on you, cooking is done on stoves provided. A key may be required for access.

Please note there is no reciprocal discount rights with alpine club members from Austria, France etc unlike in continental Europe. More details can found be found at the DNT website here.

JOTUNHEIMEN- "The land of Giants"

The Jotunheimen region contains Norway's highest peaks and is an extensive mountain region. It would be possible to spend weeks hiking in these mountains. It contains the famous and very popular Bessegen Ridge - leave early because there are many hikers on this route. If you do it you will see why. Apart from this the breadth of the trail network means the there are suprisingly few people around on most of the other trails. Climbing Norway's two highest peaks Galdhøpiggen 2469m & Glittertind 2464m is a must for aspiring mountain walkers: the summits of both can be reached by experienced walkers with no special technical equipment or skills. A personal highlight for me was climbing Kyrkja. The summit of this pyramid-shaped peak is attained with some scrambling skills required. It is a delightful small mountain top and is so central in the Jotunheimen National Park that four river systems lead from its four flanks.

The Jotunheimen is covered by an excellent trail network and has many lakes and huts. There are walks at all standards and at places it is possible to get deep into the mountains by way of ferries on the larger lakes. 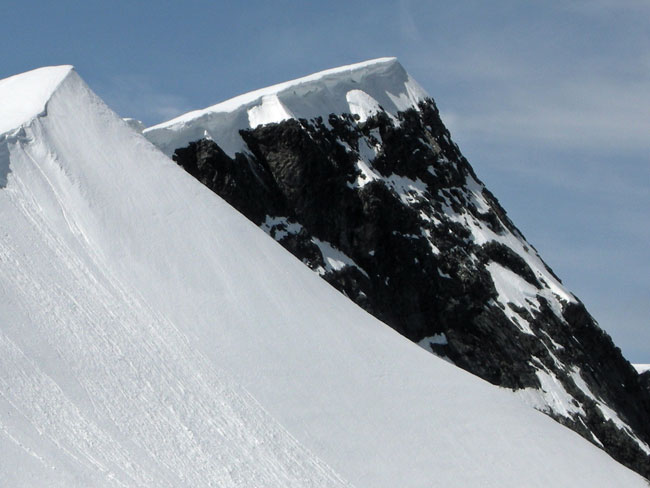 From my diary:
"We came to the top of the Bessegen ridge which was an idyllic spot for lunch. Sitting high above the lake with a steep drop off, the sky and lake both blue, and in the distance the snow covered peaks of the Jotunheimen and not a breath of wind." 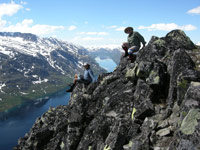 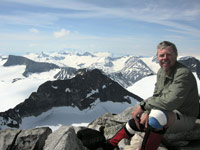 "Another incredibly long but rewarding day. It is hard to get going first thing. Probably due to cumulative exhaustion! We set off in the snow from Leirvassbu. A climb of about an hour to a saddle and then we down packs to climb Kyrkja, 2032m.

This was fantastic climbing up a steep rock spire with some scrambling at the top. Impressive mountain to look at, impressive to climb. On the summit it really felt like you were on a mountain. Just a small rock top with steep dropaways on all sides. The four valleys draining from this peak form the four major rivers that flow from the Jotunheimen. We really are at the centre of the Jotunheimen." 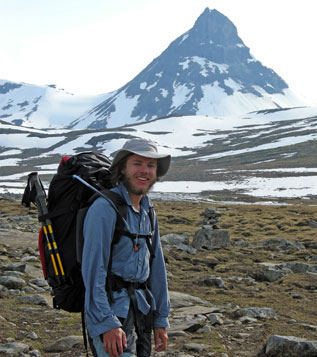 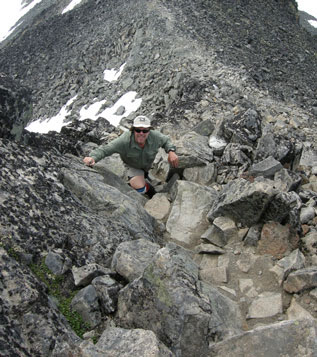 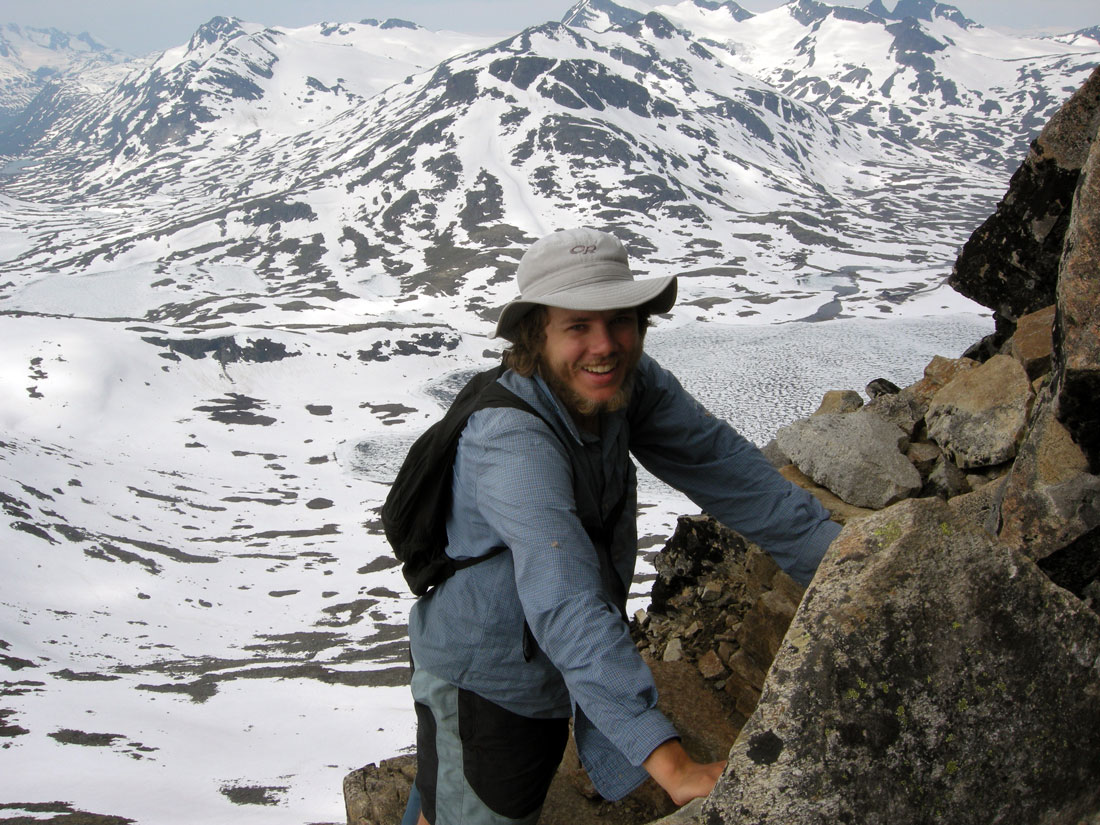 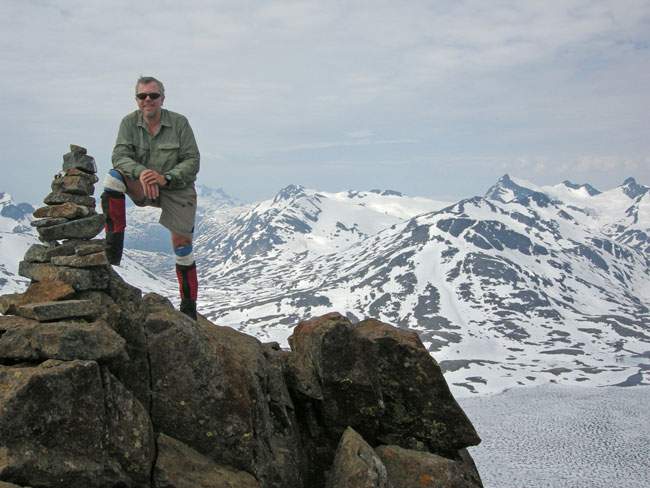 Situated on a high plateau the Rondane is surrounded by expansive high rolling country, but the Rondane itself has a core of rugged exciting peaks. The high tops offer superb views and at times demanding walking, although it is quite possible to walk in a more leisurely fashion in the Rondane. In the time I was there we saw several large herds of wild reindeer and reportedly this region is one of the few remaining places where wild Musk Oxen can be seen. I visited in late June, which is very early in the walking season, and thus there is more snow in the attached photos than would be expected in July and August. The Rondane is Norway’s oldest National Park and is of ecological importance for having Norway’s largest population of pure breed wild reindeer as opposed to domestic varieties.

From my diary:
"Past the Rondvassbu Hut and we begin the long climb up Vinjerenden. Very steep loose scree. Then up the ridge to the summit of Rondeslottet. There is lots of snow on top. Not difficult but if the snow had been frozen it would have been a different story. Then down a long, long snow slope. A long walk ensues to Bjornhellia Hut passing a beautiful waterfall 4kms before the hut. We are feeling pretty weary by the time we arrive at 7.15pm having left at 9.00am. A long day to start our trip. Hot shower and enormous dinner. Day 10:15hrs. 1410m climbed." 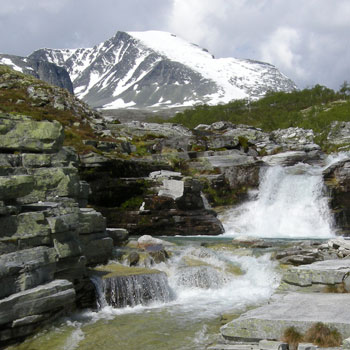 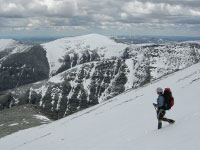 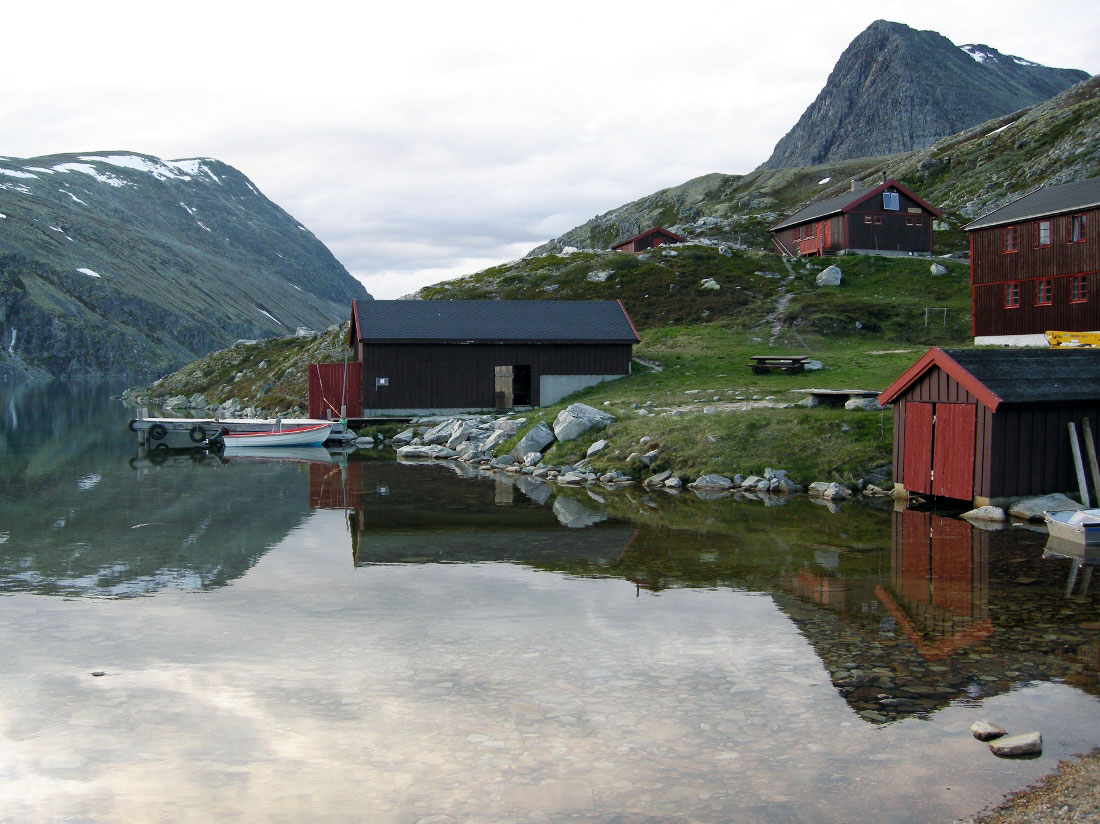 TROLLHEIMEN – “The home of the Trolls”

Trollheimen is a little lower than the other two areas so there are more forests and once again large tracts of high rolling country. The landscape is punctuated by fine peaks, perhaps none better than Trollhetta which offers a challenging traverse which would stir the heart of any mountain walker. Mosquitoes seem quite prevalent here, perhaps they breed in the hairy coats of the trolls that are apparently lurking in gloomy places waiting for the unwary traveller. It is lucky the days are so long because reputably the trolls turn to stone if they come out in daylight.

"We climbed out of the valley and were soon in the world of cascading streams fed by the snow melt and half frozen lakes. We headed off the track to climb Blå Høa 1671m for a great view. We were perched on top of a wall of cliffs on one side but the top sloped very gently back the other way. " 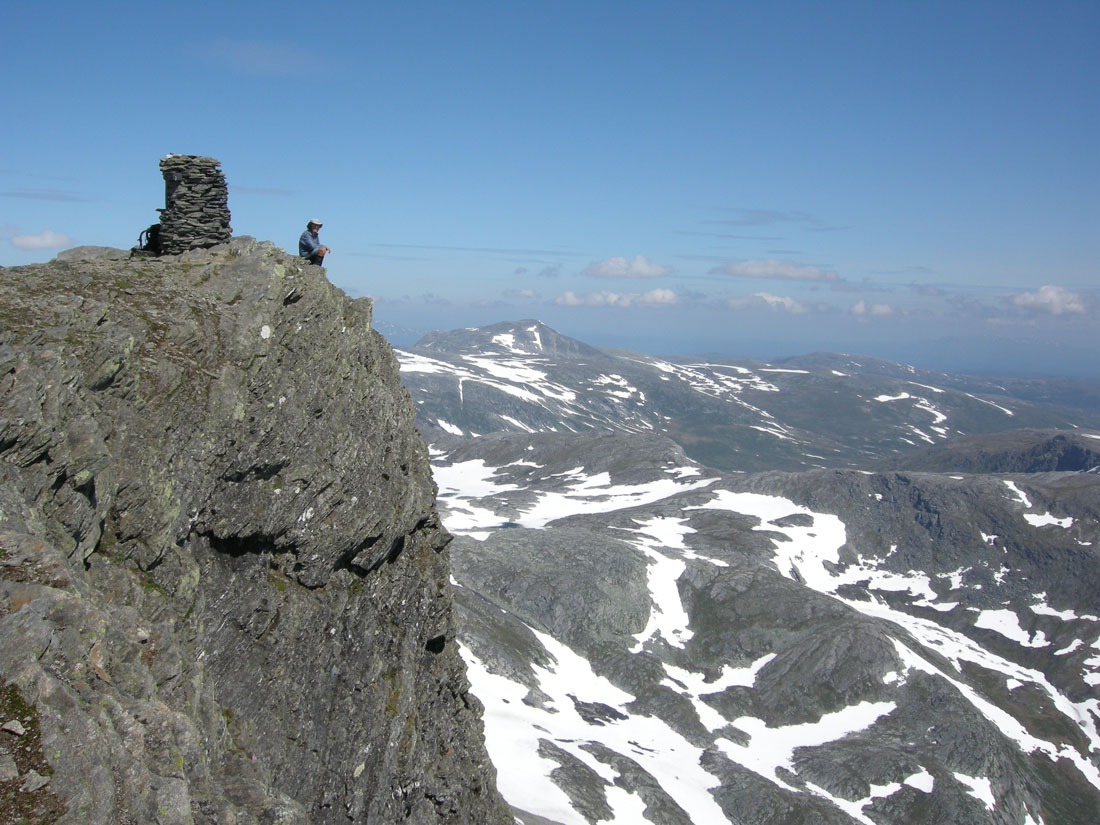 Norway has a great skiing culture and many of the huts have a winter season allowing hut to hut tours through extensive tracts of country. I have not personally done this but know several people who have including Bogong ex staffer Merv. Routes between huts are usually marked by canes. The ski touring season is typically in March and April. An example of a winter opening hut can be found here.

As previously mentioned the Cicerone Guide Walking in Norway is an essential companion.

Mountain lovers everywhere should visit the website Scandinavian Mountains. This extensive and fascinating site has a description for every Scandinavian peak over 2,000m including a grade, routes, map and equipment needed. This site is highly recommended.

For general information, all in English, try Visit Norway

Many mountain huts have their own websites, often with English. For example Gjendebu

This is the fifth post in a series by Bogong owner Neil about the Why, Where and How of hiking in Europe. See also: