You may have heard the modernist catchcry "form follows function, ornament is a crime!"   Well Hartmut ORTLIEB must surely have read that book too. Across the Ortlieb range of bike panniers, backpacks, shoulder bags, drybags and camera bags there is a clear and clean design ethos that has simplicity and functionality at its core...

Back in 1981 Hartmut Ortlieb was a young cycle adventurer with a wet sleeping bag and damp clothing standing forlornly roadside in an English Spring downpour. So the story goes, a delivery truck chortles past sporting a canvas tarp with dry and intact contents within. Hartmut has an "A-ha" moment and converts his misfortune into creativity, returning home to knock up a pack-like container out of red truck tarp, some webbing strap and hooks from the hardware store.

From there he refines and distills his invention further and based on the "packhorse" principal he ends up with two packs...and by and by the ORTLIEB bike pannier was born. His friends and acquaintances loved the simplicity of the design and soon wanted to know where they could get hold of them.  Space was made, the sewing machine was moved into the garage, and the first distribution plans for a pannier line were instigated.

It was a rare time in the outdoor industry where a few gear freaks with an idea, an eye for an opportunity and the wherewithal, were starting up businesses from a grass roots base.

Soon after, ORTLIEB's rear pannier invention was closely followed by a front handlebar bag. Interest and demand in ORTLIEB products had now become too widely spread for the company to operate as a one man enterprise. Family members and friends were brought into the fold and in 1982, the company ORTLIEB was founded. 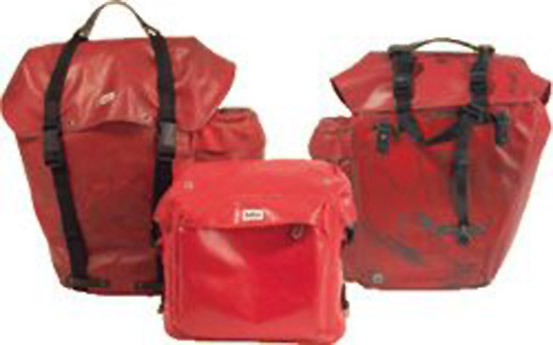 What followed were a number of milestones on the ORTLIEB landscape:

1/  WATEPROOF WELDED SEAMS
High frequency hot welding guaranteed higher strength and preserved the material at the same time. An old disused machine which had been used for manufacturing spectacle cases was re-commissioned into series one of production. From then on, ORTLIEB panniers were sold as 100% WATERPROOF without the need for impregnation or taped seams. The first major ORTLIEB milestone! Waterproof welded seams can now be found across the ORTLIEB range.

2/  THE ROLLTOP CLOSURE
This simple but incredibly effective closure principle originated with the ORTLIEB dry bag, but can be found across the ORTLIEB range.  You simply roll the open end of the sack three or four times and then fasten the buckle. The result is not only a waterproof closure, but one where the bag will float too. You'll find this closure principle throughout the ORTLIEB range including: panniers, rack packs, dry bags and daypacks.

3/  BACK ROLLERS
The success of the iconic Back-Roller panniers cemented ORTLIEB'S reputation worldwide. "Hundreds of thousands of Back-Rollers are travelling as faithful companions around the globe. Numerous supporters and all weather bikers carry the message of the reliable brand ORTLIEB around the world." (Ortlieb website)

4/  BICYCLE MESSENGER BAGS
Bicycle messengers adopted the ORTLIEB backpacks and suddenly "messenger bags", became a  part of the urban landscape. The proliferation of the backpacks in the rough and tumble bicycle courier world provided the “major cred” that practicality and durability was central to the ORTLIEB philosophy. 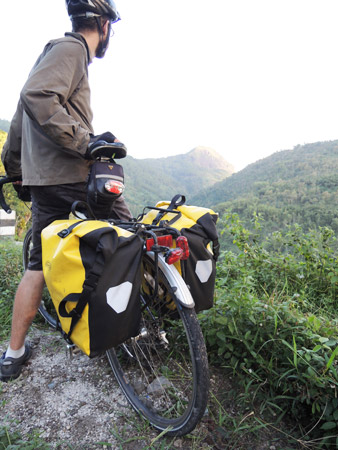 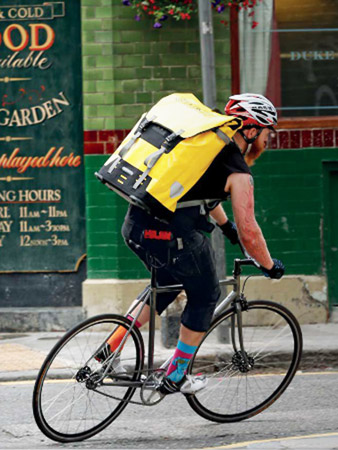 In addition ORTLIEB became one of the first German companies to have a web presence in the early 1990s.

Ortlieb now has over 21 distributors in 19 countries all over the world, and has established itself firmly in the position of a quality product with an environmentally friendly delivery. Clients such as Greenpeace have commissioned an order for a pannier line demanding strict regulations during the series production. The truck tarp inspired materials of the first few years have now been replaced by new materials which are custom designed according to ORTLIEB’s specifications.

All products in the high frequency welding process are exclusively manufactured at the company headquarters in Heilsbronn where the tag “Made in Germany” is a significant point of difference for Ortlieb. At Heilsbronn, Ortlieb manufacturing processes are centralised on the one site comprising: engineers, designers, technicians, and manufacturing all under one roof along with their warehousing and distribution. This centralised structure allows all the departments to work closely, facilitating direct communication and allowing decisions to be made quickly.

For 30 years, ORTLIEB has been providing innovation in the biking and outdoors markets and their core market has always remained the same: active outdoor enthusiasts who wish to feel unencumbered by factors they cannot influence, in other words: the weather. 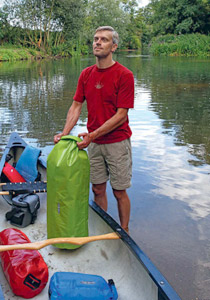 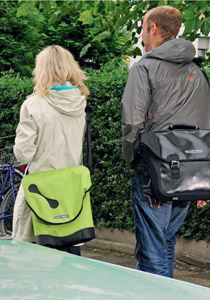 Beyond that core market  ORTLIEB has always had a much wider appeal: to those buyers who simply love great gear which is hard wearing, well designed and enduring.

Pop into Bogong and check out our ORTLIEB range - which is one of the most extensive line-ups in Australia. Here’s a selection of some of my favourite offerings from this special and very unique German brand:

The Back Roller Classic