Moir's Guide Book and is recognised as the definitive, classic guide. It covers all tramping routes in the area covered, not just the well known walking tracks. A must for the serious hiker.
Add to Wish List
Skip to the end of the images gallery 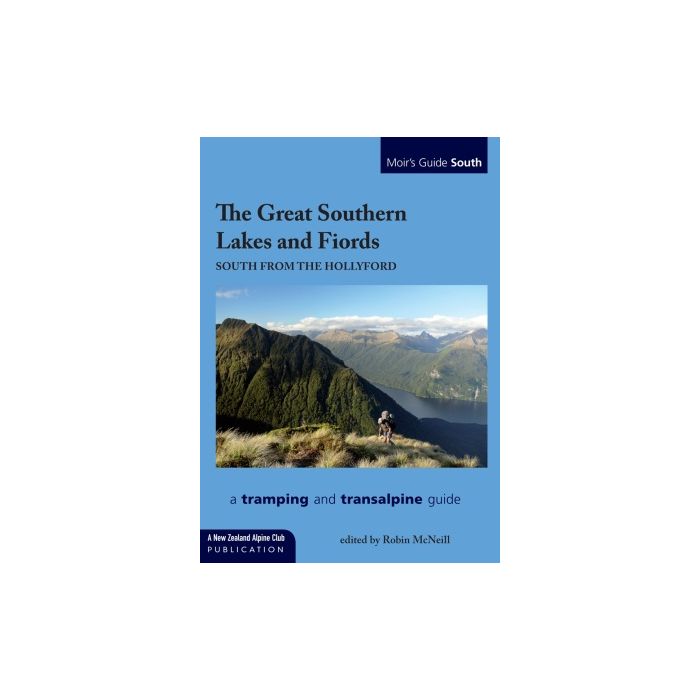 A guide to walking in the southern alps of New Zealand

Moir's Guide South Book was first published in 1925 as Moir's Guide Book and is recognised as the definitive, classic guide to the tramping and hunting areas of Fiordland and the Eyre, Snowdon and Takitimu Mountains. This completely revised seventh edition describes every known track and route in these areas which include New Zealand's most famous tracks the Milford, Routeburn, Hollyford, Greenstone-Caples, Hump Ridge and Kepler Tracks. The less well known, but equally spectacular Dusky and George Sound Tracks are also described.

The route and track descriptions are matched to the level of experience parties are likely to have. For the popular tracks, the information provided will enable those with little experience to enjoy their tramp; those travelling through more challenging country will find the route descriptions indispensable. Moir's Guide South is published by Great Southern Lakes Press in association with the New Zealand Alpine Club and is the companion guide to Moir's Guide North, which describes the area north of the Hollyford to Mt Cook.

Robin McNeill began serious tramping and mountaineering in 1976 while studying at the University of Canterbury. After graduating with an honours degree in electrical engineering in 1980, Mr McNeill moved to Invercargill where he developed a passion for re-exploring the areas described in this guide book. After living in various parts of the world, he now again chooses to live in Invercargill, as close as he can manage to Fiordland.

As well as tramping, Mr McNeill is an active mountaineer he has climbed a number of well known mountains in New Zealand, including Mounts Cook and Tutoko and occasionally hunts red deer. Mr McNeill writes occasional articles and a regular column on tramping for the FMC Bulletin, which has a considerable following.

Reviews
Write Your Own Review
Sold Out
Notify me

You may also like
© 2021 Bogong Equipment Pty Ltd, Melbourne, Australia.